Manila, 9 April 2020 – Following numerous news articles and reports of arrests and severe abuse of children in the framework of the COVID-19 pandemic, the Children’s Legal Rights and Development Center (CLRDC) , a human rights organization in the Philippines that promotes child protection and restorative justice,  urges the Government to strictly abide by the rule of law and protect the most vulnerable members of our society.

COVID-19 poses a multidimensional threat to nations around the world, thus fully justifying the Government’s decision to declare a state of public health emergency. However,

CLRDC is alarmed by the growing number of directly verified reports of abuses and violence committed against children, who are a vulnerable group at all times, even more during a pandemic.

CLRDC has directly monitored violations of children’s rights during the implementation of the Enhanced Community Quarantine in Luzon. While some children were arrested and detained for curfew violations, others were allegedly subjected to torture such as shaving of their hair, shaming, and threatening with physical harm including threats of being shot. Other incidents revealed that several minors were detained in a dog cage and others were forced inside a coffin to deter them from further curfew violations.

These incidents constitute blatant violations of Section 3 (a) of the Anti-Torture Act of 2009 and other child protection policies, especially Republic Act No. 10630 known as the Comprehensive Juvenile Justice and Welfare System, as well the Philippines’ international obligations under the UN Convention on the Rights of the Child and the UN Convention against Torture.

CLRDC reminds the authorities that, under Republic Act No. 10630, no penalty shall be imposed upon minors who violate curfew ordinances and they shall be immediately released to the custody of their parents.

Amid the mounting pressure brought about by the ongoing health crisis,  the CLRDC urges the Government of the Philippines to abide by the rule of law and to ensure that fundamental rights remain in place. It further exhorts law enforcement officers and other persons in positions of authority to respond to this crisis in a manner consistent with existing conventions, laws and protocols, and to be guided by the principles of human rights, especially when dealing with children.

CLRDC remains committed to the protection and welfare of all children at this difficult time.

The Children’s Legal Advocacy Network (CLAN) calls on the House of Representatives to reconsider its decision to lower the Minimum Age of Criminal Responsibility (MACR) to twelve (12) years.

Lowering the MACR would mean a drastic interference with children’s fundamental rights. Detention of children harms their social, emotional and physical development as well as it violates their right to freedom of movement, to access education and the right to grow up in a healthy and supportive environment. By ratifying the UN children’s right convention, the Philippines dedicated themselves to include the key principles of the convention into their law. The best interest of the child, non-discrimination, child participation, survival and development should be non-derogable but will be violated if the bill of lowering the MACR will be passed.­

The proponents of the MACR bill kept on repeating their arguments that children are being used by syndicates to perpetrate a crime. The violations of laws are mainly connected to lax in the social system. If the syndicates, parents or other adults abuse minors for their criminal actions because of the deprived economic circumstances in their lives, this can be prevented through improvement in the social welfare system. And if according to them children are used by syndicates, therefore children are the victims and the laws should punish the syndicates, not the children. Reducing the MACR only lowers the age of the abused children in reality. This would be completely contradictory to the principle of child’s best interest.

Furthermore, in making international comparisons on the MACR, the different social and economic conditions must be considered. We cannot just pick out one law of a whole system and try to impose it on the Philippines, who have a complete different political and social background. If we take Western Europe as an example for criminal liability at the age of 13, it is to be noted that their judicial treatment is completely different and the standard of accommodating youth offenders are higher. For example: In Austria the best interest of the child means to get support within and for the whole family instead of punishing with detainment.

Rehabilitative approaches are the future to prevent a further increase of criminality rates. To make them effective, a greater effort needs to be made in view of the implementation of the current Juvenile Justice Law. As children are the future of our country, laws must protect them instead of putting them in the pillory.

The growing public concern on the legislative proposal currently pending at the House of Representatives that seeks to criminalize children above nine (9) years old, sends a strong message that this measure is not the most logical solution to the alleged increased of children involved in criminality as claimed by the proponents of the bill that seeks to lower the Minimum Age of Criminal Responsibility (MACR) from 15 to 9 years old. END_OF_DOCUMENT_TOKEN_TO_BE_REPLACED

The Children’s Legal Rights and Development Center (CLRDC) remains steadfast in its position against the lowering of the Minimum Age of Criminal Responsibility (MACR) as it defended the human rights of children deprived of liberty as well as the children at risks during a Committee Hearing by the Sub-Committee on Correctional Reforms, Committee of Justice at the House of Representatives on November 16, 2016.

CLRDC Executive Director Rowena Legaspi was invited to be one of the Resource Persons to present its position before the said Committee on why the MACR should not be lowered. Currently, there are six bills pending at the House of Representatives which all seek to lower the MACR, they are HB 02, 505, 935, 1609, 2009 and 3873. These bills argue, among others:

–          That there is a dramatic increase in the number of children being involved in criminal syndicates, and the latter continue to use those exempt from criminal liability to perpetuate their crime;
–          That in other countries like Europe, USA, the MACR is more lower;
–          That the authors want to teach the children to be responsible in their actions;
–          That if the above 15 and below 18 acted with discernment, they will be tried as adults
(HB 935)

In its position paper presented before the said Committee, CLRDC maintains that lowering the MACR is not the ultimate solution to address the aforesaid bills’ concerns. CLRDC said that “the violations of laws of some minors if indeed they are used by syndicates, are mainly connected to laxity in the social system. If the syndicates, parents or other Adults abuse minors to perpetuate their criminal actions, this can be prevented through improvement in the social welfare system, and the proper implementation of law against child abuse.” CLRDC further states in its position paper that “reducing the MACR in law would be completely contradictory to the main purpose of the child’s best interest. If the goal of the bills is to protect our children, then the call must be to punish severely those who use and take advantage of these minors and break their innocence. The failure of the system to go after the syndicates that use minors reflects weakness of law enforcement in implementing the law”. 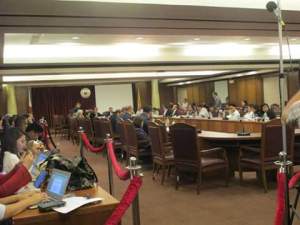 CLRDC underscores that “Children in conflict with the law were many times victims of different circumstances before they landed in detentions, and at the detention centers they continue to be victims as they suffer continued deprivation of access to health, education and justice.” “If we put the nine years old above into detention center by passing these bills, then we are perpetuating the sufferings that these children already endured, the State is not helping, it is condemning the child to a life she or he never deserved by the faults of the adults around him or her. If we incarcerate them as early as 9 years old, who are the most vulnerable and defenseless, the State is more than guilty of stealing these children’s future.”

CLRDC recommended to the Committee the full execution of the juvenile justice law instead of lowering the MACR which violates the many constitutionally protected rights of children. CLRDC was joined by Salinlahi, PAYO and Humanitarian Legal Assistance Foundation (HLAF) in articulating to the Committee its opposition to the MACR bills.

The committee hearing on the MACR will be continued on November 21, 2016. A very reliable source said that the Committee targets the passage of the MACR bills this coming December, along with the death penalty bill. If the death penalty and the lowering of the MACR bills are passed into law, children above 9 years who committed heinous crime punishable by death, are not spared from this harsh punishment.

Help this site, Make a Donation